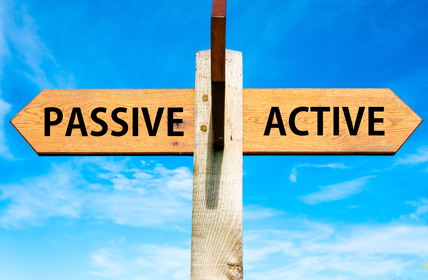 The subject of a sentence in the active voice performs the action. For example:

The dog (subject) chewed the bone.

Whereas the subject of a sentence in the passive voice receives the action. For example:

The bone (subject) was chewed by the dog.

Although the same information is conveyed in both examples, writing in the active voice is a good rule of thumb because it is typically more concise and direct. However, this doesn’t mean that you should never use the passive.

Passive has its place

So when is using the passive OK? Firstly it depends on what type of writing you are doing. For example, the passive voice is typically used in scientific, academic and technical writing where the writer wants to avoid any personal involvement with the subject matter. But there are also other occasions when the passive voice may be preferable.

For example, if you are describing something where it is more important to emphasise the person or thing that experiences the action or you don’t know or don’t want to explain who or what performed the action, then use the passive. For example:

The church was built in the 15th century (we are only interested in the church, not who built it).

The boy was hit by a car (we are only interested in what happened to the boy, not who was driving the car).

Similarly, if you are writing about something that happened in the past, you can use the passive voice without losing any clarity or directness. For example:

I hope this brief explanation has shed some light on the difference between active voice and passive voice but if you are still unsure there’s lots of information on the internet about this – it’s quite a hot topic!

Print
Active voice or passive voice – which should you use?